→ In the late summer of 2015 Thomas Jockin, the designer of the typeface Azote and the initiator of TypeThursday in New York visited me to conduct the following interview. It was first published on Medium and is here re-posted with gracious permission. 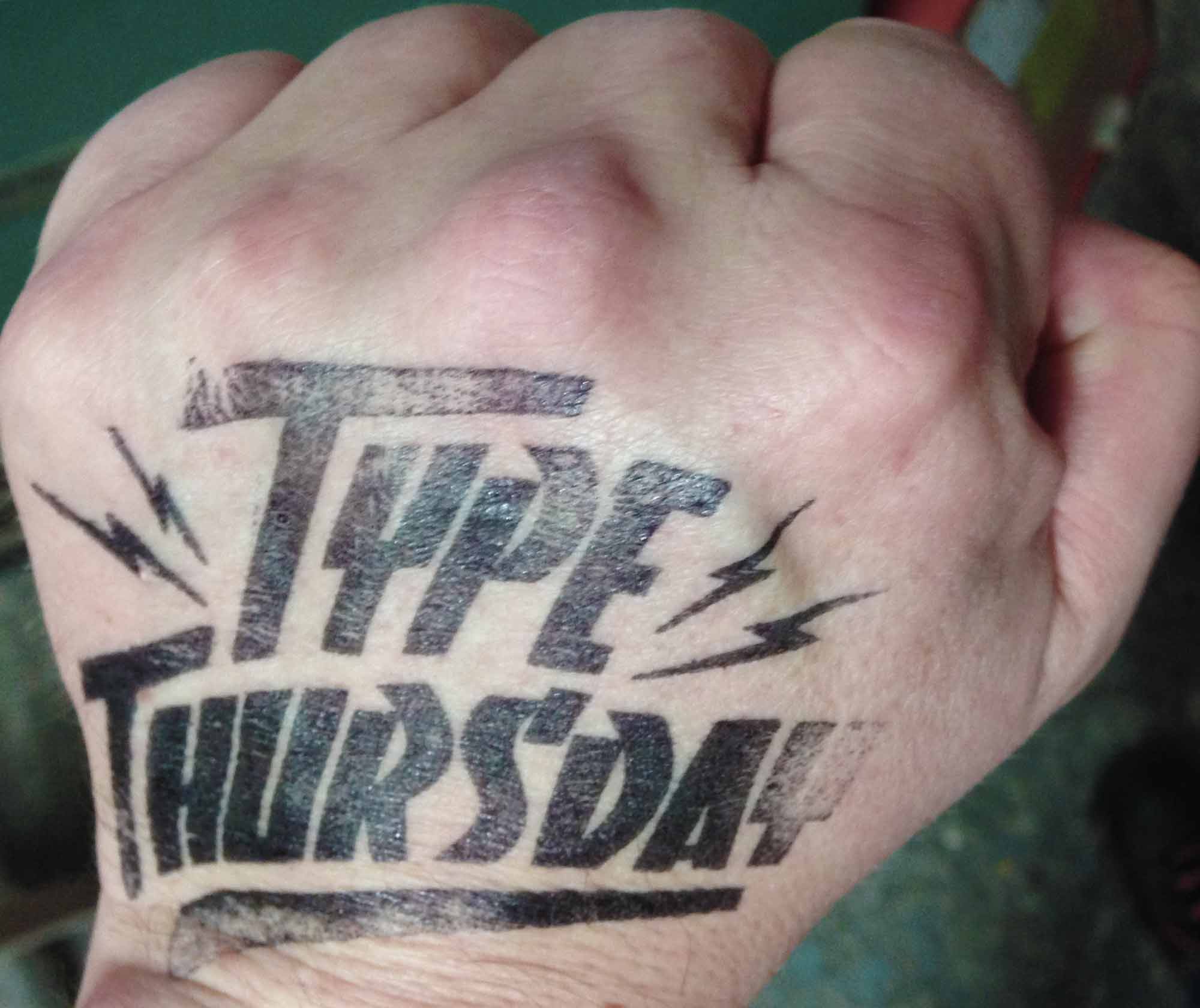 TypeThursday sat down with typeface designer and educator Hannes Famira. We discussed his introduction to teaching and common pitfalls for beginner and intermediate typeface designers. Hannes is one of best resources for type design. We’re very happy to have him.

TypeThursday: When I first met you, you were the instructor for my elective class for Type@Cooper, right?

It was the design space workshop, right? I remember first meeting you, I was like “Oh my God. This guy is so fuckin’ smart.” Like, it was great! I was really amped about the class. You were one of my favorite instructors in the program.

You were! Totally because I just love the way your energy about it- that I could tell you really enjoyed teaching. Your approach to type design was a great resource for people getting into typeface design; Thinking about design and the process behind it. That’s why I’m always excited when you come to Type Thursday meet-ups because you’re one of the best resources for the critiques to the group.

Totally! It’s super cool. What got you into teaching in the first place? What was it about —

Because I can tell how much you love it I would like to know what brought you to teach. I remember you told me one time over dinner you started as assistant teacher in Germany, right?

No, actually, it started in Switzerland. I just moved from the Netherlands to Basel and the morning I arrived with the truck with all my luggage and my furniture, I got a phone call from the school there and they said “This friend of yours told us you moved to Basel and our type teacher just quit in the middle of the semester. Can you come in for an interview?” And they hired me off the spot just to start basically that week to teach a foundation level and a post-graduate level type design classes. So, I arrived and — boom — I had these classes and I never taught before. In the beginning, I really felt like a fraud. But it was wonderful for me to package everything I had learned in the Netherlands into a cohesive form and bring that to Switzerland because there was nobody in Basel who was teaching Noordzij’s ideas.

Yeah, because you went to KABK, right?

Nice- I was negative 6 [Laughter]. Yeah, because the appreciation for type has changed so much since back then. Especially from back in 1996 to when I met you, at Cooper Union, in 2010.

From all that experience, what are the general loopholes or gaps beginners make that you’ve seen consistently?

I think that there are two issues that I encounter. One is that a lot of people, even people who have graduated from art school, don’t know how to draw. I think that some basic academic techniques are not taught anymore.

Do you mean in terms of formal shading and model making?

No, I mean much more basic. Like you have a pen in your hand and draw. I have a feeling that a lot of art education is conceptual and everybody who can draw a straight line is being looked down upon as a craftsman and not as an artist. So, I have a lot of people who are really afraid to take a pen in their hand and start drawing on paper. They feel much more at home once we transition to a computer. The other issue that I encounter with beginners is that the way type is taught in typography classes is mostly historical. People just look at type history and instead of understanding the physics in type design, they understand the historical background. That is really confusing because it groups typefaces in a way that makes it very seductive for a beginner to start at the wrong end.

Can you give me an example just to clarify that? The idea of the mechanical process versus the historical associations?

Yeah, I don’t even mean the mechanical process. I think that if you take writing as a foundation of type design, then it’s easier to understand the shapes than if you look at the VOX classification or you say “This is renaissance. this is baroque. this is 19th century”. So you think of 19th century type as something that is localized in history and not as a concept that you can use like a chef uses butter.

A top-down/ conceptual approach divorced from this formalistic foundation idea.

I really think that Noordzij made life much easier for type designers.

To the intermediate guys — like say they took your beginner workshop or already have background information on making type. I do believe there’s always problems to resolve. Just because you finished a beginner course does not mean that your problems are solved. You have new problems to deal with. Looking at a higher level type designers you’ve mentored, do you see common pitfalls or issues in their approach?

You know, when we’re talking intermediary, I think those are designers who have made one typeface or two typefaces. In the learning curve, they are advanced but in actually having gone through the process, they’re still somewhere in the beginning. It takes a while for a designer to realize how little you have to do to make something special. It is a common mistake —

They try to do a lot of moves?

To attach all the bells and whistles that a typeface can bear in order to create something original. I think the toughest lesson is that if you take all the bells and whistles off, you still have something very original if you work from within your own sensitivity as a designer because you can give the exact same combination of variables to two designers and they will draw wildly different typefaces.

The fundamental thing you realize more and more is your relationship to negative space. You design for what is absent. Instead of looking at what to add on top, design becomes an act of negotiation. The white space between the letters — that is actually where the magic really happens.

That’s what you see when you draw the black shapes. That’s very cool. That’s a cool effect. You know, that is also a reason why I think that type design belongs in undergraduate graphic design education because the biggest part of visual communication is typography. If you practice typography without having at least had a taste of type design, the understanding of the hierarchy of white space ends at the choice of typeface. So, the tracking depends on the counter-space. The word space depends on the tracking, and the linespace depends on the word space. So there is an inverse hierarchy where the smallest object on the page dictates the rest of the typographic parameters. If you’re a typographer and all you do is buy a font and then make typography with you, you’re lacking that first step; The space between characters is determined by the space inside the characters As a typographer, you can add tracking or you can kern stuff, but you cannot shape what’s inside a character. As a type designer, you can look at the counter inside the lower case ‘b’ and shape it and then you look at the counter in the lower case ‘n’ and you shape it and you look at the ‘b’ and the ‘n’ and you make them work together. That’s like getting into the molecules of typography.

Also, for the intermediates, there’s the question of type families. A lot of intermediates think it’s a given. Just add weight. Make it italic. Make it small caps. I think that’s a domain of consideration as important as these micro points we’re discussing. I’ll be honest, that’s my perspective. To gain a larger relationship along with the super micro relationships. Do you feel like that’s another area that — I’m baiting you on this one [Laughter].

You know, I think that when you start designing a typeface, it’s helpful to consider that you’re painting one corner of a big painting. That this typeface is just one instance in a theoretically limitless design space of variations. You can imagine the same typeface in wide or in narrow, in heavy or in light, in high contrast or low contrast. There are limitless alternatives and you might end up drawing a lot of them or just drawing two or three more masters. But if you set out designing a typeface and consider the relatives of this typeface, you have a different vantage point. It’s like the type setter that opens one drawer and goes “Oh! Helvetica semi-bold 12 point”. That is a myopic view of a typeface. But thinking of an interpolation with several axis is the other extreme where you realize that every shape you draw is just the shape that this typeface takes under a certain constellation of design variables. So, I think for the intermediate designers, that is the big challenge — to get out of the project you work on and widen your view and see that you’re really just drawing one instance. If your client approaches you and says “I need a titling face of that font” or “I need a body text of that font” then you’re not drawing a new typeface. You’re just changing your typeface by changing the variables.

God, that’s so cool. I love this shit. [Laughter]

Hannes, it’s been great talking to you. I really appreciate it.

Cool. Well, thank you. Thank you for coming.

Hannes Famira is teaching both beginner and intermediate level typeface design workshops at Type@Cooper this semester. Registration for both ends September 25th, 2015.

TypeThursday is a monthly meet up for people who love letters in New York City. Our next event is October 1st in South Williamsburg. RSVP to attend.